Apache Spark and Apache Flink are two of the most popular data processing frameworks. Both enable distributed data processing at scale and offer improvements over frameworks from earlier generations. Flink is newer and includes features Spark doesn’t, but the critical differences are more nuanced than old vs. new. We’ll take an in-depth look at the differences between Spark vs. Flink. Before we get started with some historical context, you're probably wondering what in the world is Macrometa? Check out the comparison of Macrometa vs Spark vs Flink or watch a demo of Stream Workers in action.

Modern data processing frameworks rely on an infrastructure that scales horizontally using commodity hardware. In this category, there are two well-known parallel processing paradigms: batch processing and stream processing. Batch processing refers to performing computations on a fixed amount of data. This means that we already know the boundaries of the data and can view all the data before processing it, e.g., all the sales that happened in a week.

Stream processing is for "infinite" or unbounded data sets that are processed in real-time. Common use cases for stream processing include monitoring user activity, processing gameplay logs, and detecting fraudulent transactions.

The evolution of distributed data processing

Spark and Flink are third and fourth-generation data processing frameworks. To understand how the industry has evolved, let’s review each generation to date.

MapReduce was the first generation of distributed data processing systems. This framework processed parallelizable data and computation on a distributed infrastructure that abstracted system-level complexities from developers and provides fault tolerance. It also supports batch processing.

Spark is considered a third-generation data processing framework, and it natively supports batch processing and stream processing. Spark leverages micro batching that divides the unbounded stream of events into small chunks (batches) and triggers the computations. Spark enhanced the performance of MapReduce by doing the processing in memory instead of making each step write back to the disk.

Flink is a fourth-generation data processing framework and is one of the more well-known Apache projects. Flink supports batch and stream processing natively. It promotes continuous streaming where event computations are triggered as soon as the event is received.

A high-level view of the Flink ecosystem. Source.

Request a demo with one of our expert solutions architects.

While we often put Spark and Flink head to head, their feature set differ in many ways. The table below summarizes the feature sets, compared to a CEP platform like Macrometa. In the next section, we’ll take a detailed look at Spark and Flink across several criteria. 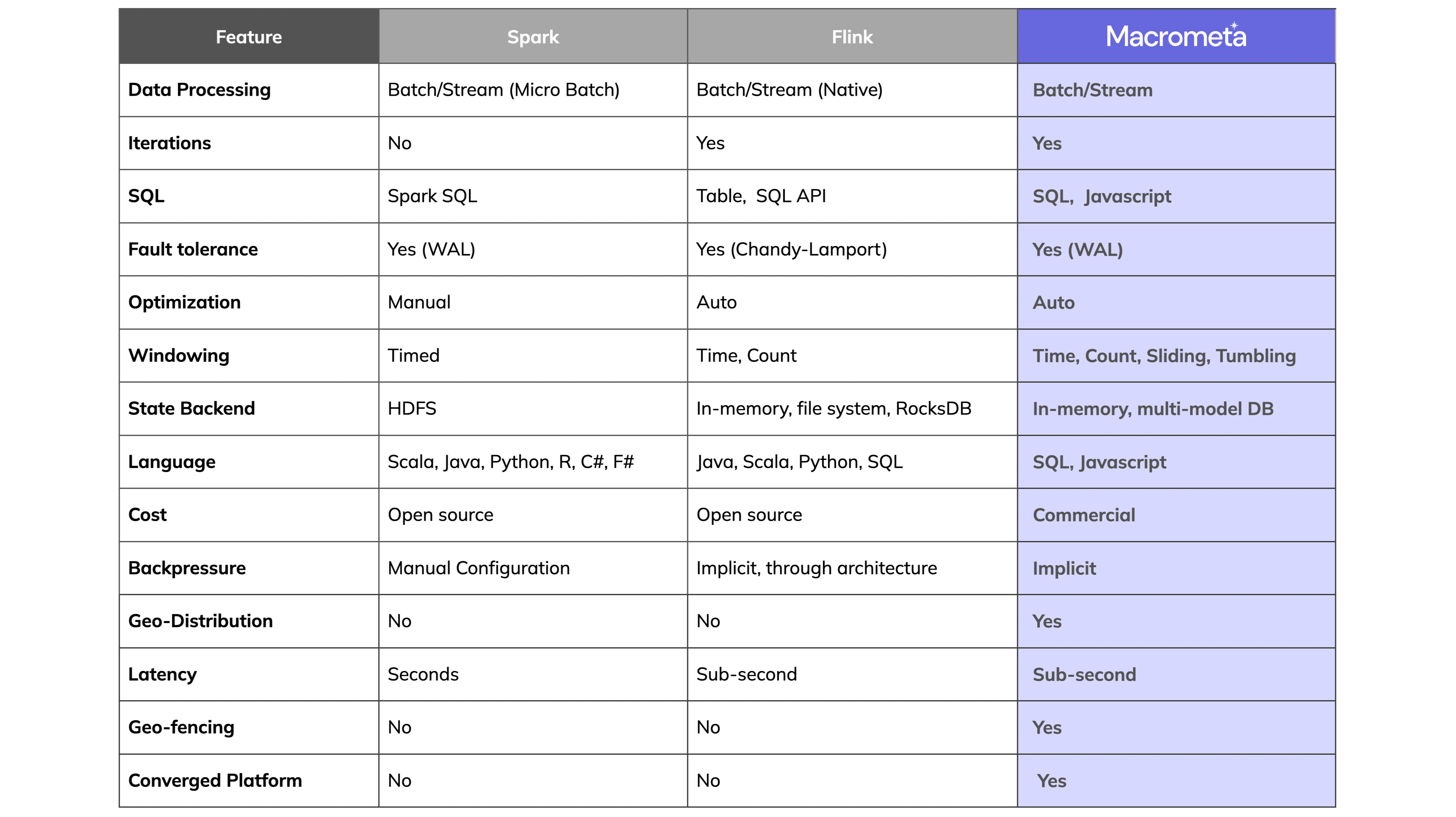 Click the table for more information in our blog.

Spark vs. Flink: an in-depth look

A table of features only shares part of the story. While Spark and Flink have similarities and advantages, we’ll review the core concepts behind each project and pros and cons.

Spark’s consolidation of disparate system capabilities (batch and stream) is one reason for its popularity. Although it provides a single framework to satisfy all processing needs, it isn’t the best solution for all use cases. 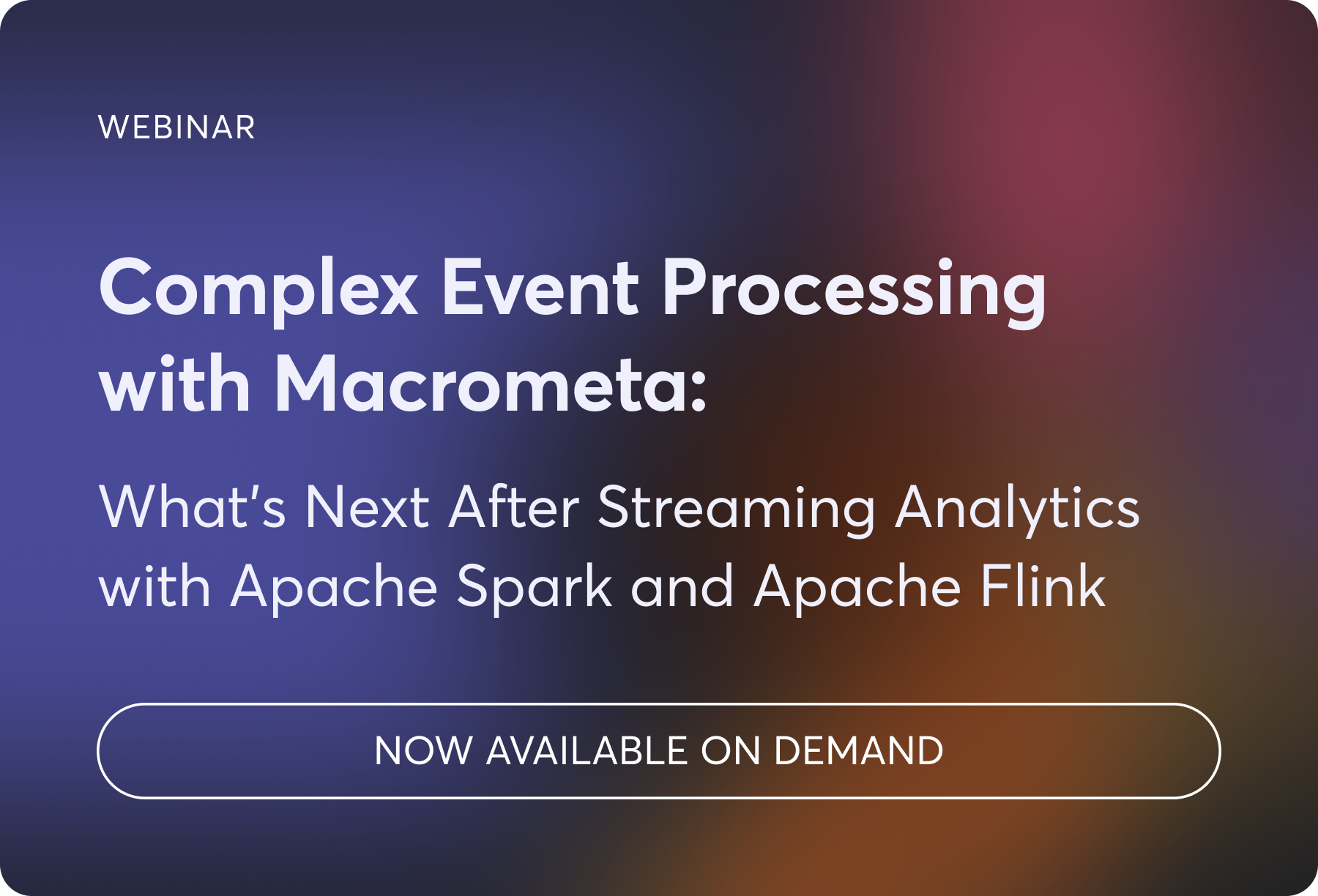 Watch our webinar to learn more

However, Spark does provide a cache operation, which lets applications explicitly cache a dataset and access it from the memory while doing iterative computations. Since Spark iterates over data in batches with an external loop, it has to schedule and execute each iteration, which can compromise performance. Flink instead uses the native loop operators that make machine learning and graph processing algorithms perform arguably better than Spark.

SQL support exists in both frameworks to make it easier for non-programmers to leverage data processing needs. Spark SQL lets users run queries and is very mature. It also provides a Hive-like query language and APIs for querying structured data. Similarly, Flink’s SQL support has improved. It started with support for the Table API and now includes Flink SQL support as well.

Both systems are distributed and designed with fault tolerance in mind. Spark can recover from failure without any additional code or manual configuration from application developers. Data is always written to WAL first so that Spark will recover it even if it crashes before processing. Since Spark has RDDs (Resilient Distributed Dataset) as the abstraction, it recomputes the partitions on the failed nodes transparent to the end-users.

Flink is a fault tolerance processing engine that uses a variant of the Chandy-Lamport algorithm to capture the distributed snapshot. This algorithm is lightweight and non-blocking, so it allows the system to have higher throughput and consistency guarantees. It checkpoints the data source, sink, and application state (both windows state and user-defined state) in regular intervals, which are used for failure recovery. Flink can run a considerable number of jobs for months and stay resilient, and it also provides configuration for end developers to set it up to respond to different types of losses.

Programs (jobs) created by developers that don’t fully leverage the underlying framework should be further optimized.

Spark jobs need to be optimized manually by developers. It has an extensible optimizer, Catalyst, based on Scala’s functional programming construct. Spark simplifies the creation of new optimizations and enables developers to extend the Catalyst optimizer.

Flink optimizes jobs before execution on the streaming engine. The Flink optimizer is independent of the programming interface and works similarly to relational database optimizers by transparently applying optimizations to data flows.

Streaming refers to processing an “infinite” amount of data, so developers never have a global view of the complete dataset at any point in time. Hence, we must divide the data into smaller chunks, referred to as windows, and process it. Generally, this division is time-based (lasting 30 seconds or 1 hour) or count-based (number of events).

Most of Flink’s windowing operations are used with keyed streams only. A keyed stream is a division of the stream into multiple streams based on a key given by the user. This allows Flink to run these streams in parallel on the underlying distributed infrastructure. Spark has sliding windows but can also emulate tumbling windows with the same window and slide duration. However, Spark lacks windowing for anything other than time since its implementation is time-based.

Flink supports tumbling windows, sliding windows, session windows, and global windows out of the box. Furthermore, users can define their custom windowing as well by extending WindowAssigner. Flink windows have start and end times to determine the duration of the window. Flink manages all the built-in window states implicitly.

Suppose the application does the record processing independently from each other. In that case, there is no need to store the state. This scenario is known as stateless data processing. An example of this is recording data from a temperature sensor to identify the risk of a fire. However, most modern applications are stateful and require remembering previous events, data, or user interactions.

Spark only supports HDFS-based state management. Incremental checkpointing, which is decoupling from the executor, is a new feature. On the other hand, Spark still shares the memory with the executor for the in-memory state store, which can lead to OutOfMemory issues. Also, the same thread is responsible for taking state snapshots and purging the state data, which can lead to significant processing delays if the state grows beyond a few gigabytes.

In comparison, Flink prioritizes state and is frequently checkpointed based on the configurable duration. These checkpoints can be stored in different locations, so no data is lost if a machine crashes. Flink supports in-memory, file system, and RocksDB as state backend. If a process crashes, Flink will read the state values and start it again from the left if the data sources support replay (e.g., as with Kafka and Kinesis).

Choosing the correct programming language is a big decision when choosing a new platform and depends on many factors. Teams will need to consider prior experience and expertise, compatibility with the existing tech stack, ease of integration with projects and infrastructure, and how easy it is to get it up and running, to name a few. Spark and Flink support major languages - Java, Scala, Python.

Spark is written in Scala and has Java support. Both languages have their pros and cons. For example, Java is verbose and sometimes requires several lines of code for a simple operation. Also, Java doesn’t support interactive mode for incremental development. Scala, on the other hand, is easier to maintain since it’s a statically- typed language, rather than a dynamically-typed language like Python. Spark supports R, .NET CLR (C#/F#), as well as Python.

Flink is natively-written in both Java and Scala. With Flink, developers can create applications using Java, Scala, Python, and SQL. These programs are automatically compiled and optimized by the Flink runtime into dataflow programs for execution on the Flink cluster. Although Flink’s Python API, PyFlink, was introduced in version 1.9, the community has added other features. PyFlink has a simple architecture since it does provide an additional layer of Python API instead of implementing a separate Python engine.

Both Spark and Flink are open source projects and relatively easy to set up. However, since these systems do most of the executions in memory, they require a lot of RAM, and an increase in RAM will cause a gradual rise in the cost. Spark has a couple of cloud offerings to start development with a few clicks, but Flink doesn’t have any so far. This means that Flink can be more time-consuming to set up and run.

While Flink has more modern features, Spark is more mature and has wider usage. Additionally, Spark has managed support and it is easy to find many existing use cases with best practices shared by other users. In some cases, you can even find existing open source projects to use as a starting point.

While Flink is not as mature, it is useful for complex event processing or native streaming use cases since it provides better performance, latency, and scalability. In addition, it has better support for windowing and state management. Finally, it enables you to do many things with primitive operations which would require the development of custom logic in Spark.

Both technologies work well with applications localized in one global region, supported by existing application messaging and database infrastructure. On the other hand, globally-distributed applications that have to accommodate complex events and require data processing in 50 milliseconds or less could be better served by edge platforms, such as Macrometa, that offer a Complex Event Processing engine and global data synchronization, among others.

- Open source platforms, like Spark and Flink, have given enterprises the capability for streaming analytics, but many of today’s use cases could benefit more from CEP. If you'd like to learn more about CEP and streaming analytics to help you determine which solution best matches your use case, check out our webinar, Complex Event Processing vs Streaming Analytics: Macrometa vs Apache Spark and Apache Flink

- There are distinct differences between CEP and streaming analytics (also called event stream processing). Learn more about these differences in our blog.

In this multi-chapter guide, learn about stream processing and complex event processing along with technology comparison and implementation instructions.

The Guide To Stream Processing

Understand the use cases for DynamoDB Streams and follow implementation instructions along with examples.

The Guide To Google Pub/Sub

Learn Google PubSub via examples and compare its functionality to competing technologies.

Learn about messaging and stream processing technologies, and compare the pros and cons of the alternative solutions to Apache Kafka.

Learn about the strengths and weaknesses of Spark vs Flink and how they compare supporting different data processing applications.

Learn the use case behind Hadoop Streaming by following an example and understand how it compares to Spark and Kafka..

Learn how Databricks and Snowflake are different from a developer’s perspective. Compare their performance, scalability, data structure, and query interface.